Why Is U=U a Game Changer? 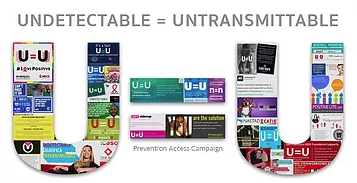 The NIH recently had the pleasure of hosting Bruce Richman, founding executive director of the Prevention Access Campaign, to explain the Undetectable = Untransmittable (U=U) campaign and what it means for addressing stigma faced by people with HIV. Diagnosed with HIV in 2003, Bruce learned in 2012 he could not transmit HIV to sexual partners because antiretroviral therapy (ART) had brought his viral load to undetectable levels. He committed to sharing this life-changing information in the hope that people with HIV and their partners will live healthy sexual and reproductive lives free of fear and stigma.

U=U has its foundation in the science behind Treatment as Prevention (TasP). The HPTN 052 study found that there is effectively no sexual transmission of HIV when the virus is suppressed in people with HIV—hence treatment as prevention. This finding was hailed as the scientific breakthrough of the year in 2011. Further research, most notably the Partners and Opposites Attract studies, corroborated the results.

U=U is a game changer because it transforms the social, sexual, and reproductive lives of people with HIV. It enables people with HIV and their partners to be in a relationship without fear of transmitting HIV. people with HIV report no longer feeling “like a pariah” or “contaminated.” Furthermore, it changes the way health professionals, the public, employers, and policymakers see and make decisions related to people with HIV.

U=U is an essential component for ending the epidemic. When people learn that U=U, they are more likely to get tested and to start and stay on a treatment. Staying on ART brings health benefits to people with HIV, their partners, and the general public.

The global U=U campaign has spread to 650 organizations in 79 countries. The campaign has been translated into more than 25 languages, including K=K in Vietnam, N=N in Dutch, B=B in Turkish, and I=I in Spanish, Italian, and Portuguese.

I look forward to learning more about the international U=U campaign when I attend the International AIDS Society Conference in Amsterdam next month.