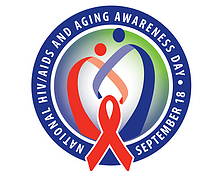 In 2018, adults ages 50 and older accounted for more than half of the people in the United States and dependent areas living with diagnosed HIV. While diagnosed HIV in people in this age group is declining, data showed that 1 in 6 HIV acquisitions occurs in this group.1 NHAAD highlights the complex issues related to HIV and aging and underscores the importance of ongoing research.

Today, effective HIV treatment (antiretroviral therapy [ART]) enables people with HIV to live longer and healthier lives. Still, many challenges exist for those who are aging with HIV, including HIV-related comorbidities and coinfections; cognitive impairments; frailty; and adverse side effects, medication interactions, and drug resistance related to HIV treatment.

The Office of AIDS Research (OAR) coordinates HIV and HIV-related research across the National Institutes of Health (NIH) and works with other NIH Institutes, Centers, and Offices to advance research that will improve HIV/AIDS health outcomes for people of all ages. To shed more light on HIV and aging-related research underway in this area, I invited two distinguished NIH colleagues to join me for a conversation: Dr. Richard J. Hodes, Director of the National Institute on Aging (NIA), and Dr. Walter J. Koroshetz, Director of the National Institute of Neurological Disorders and Stroke (NINDS). We discussed the following key topics:

Dr. Goodenow: Dr. Hodes, what are some of the unique challenges faced by people who are aging with HIV?

Dr. Hodes: Older adults with HIV might be coping with other diseases and health conditions, which can mask some of the signs of HIV. Older people are also less likely than younger people to get tested—out of anticipated stigma and because doctors do not always think to test this population for HIV. Older adults may not even know they have HIV, and by the time infection is detected, the stage of the virus may have advanced and be more likely to progress to AIDS. Individuals from diverse populations face barriers to access and availability of high-quality HIV-related health facilities and services, which contribute to known disparities in HIV-health outcomes.

Older adults with HIV have an increased risk of coronary artery disease, diabetes, osteoporosis, dementia, and some cancers and experience a high frequency of geriatric conditions, including falls, frailty, and other impairments. This may be related to persistent inflammation associated with aging that tends to be accentuated by HIV infection. They are more vulnerable to mental illness, especially depression and addiction. Low socioeconomic status is known to be associated with less successful functional aging for older adults with HIV.

Social isolation and loneliness are widely documented challenges that have implications for the health and well-being of this population, as older people with HIV tend to be particularly isolated with limited social networks.

There is research underway to determine if HIV is associated with premature aging in the female genital tract—including alterations in the vaginal microbiome and mucosal inflammation—which may increase risk for vaginal atrophy, urinary tract infections, and other genital tract infections.

Dr. Goodenow: Dr. Hodes, how has research impacted HIV prevention and treatment for people who are aging?

Dr. Hodes: Due in large part to the successful development of antiretroviral therapy, adults with HIV are living longer. This aging population increasingly experiences multimorbidity, polypharmacy, and significant mental health and psychosocial challenges. Geriatric assessment and management could help address this medical and social complexity. An NIA-supported study is currently evaluating early outcomes of this management approach in older adults with HIV.

Dr. Goodenow: Dr. Hodes, can you describe NIA studies that are underway to address HIV and aging, as well as HIV-related comorbidities, coinfections, and other complications?

Dr. Hodes: NIA is funding multiple studies in these areas spanning basic, clinical, and behavioral/social research. I can provide a few examples:

Dr. Goodenow: Dr. Hodes, could you talk about the collaborative OAR and NIA efforts to advance research related to HIV and aging and explain how NIH HIV funding supports this research?

Dr. Hodes: OAR and NIA collaborate to help increase understanding of the neurological processes contributing to dementia in older adults, including those with HIV. For example, we jointly fund cross-disciplinary research projects on the similarities and differences between the mental and physical declines seen in Alzheimer’s disease and cognitive decline associated with HIV. Another example is research on the relationship between neurodegenerative processes in HIV and Alzheimer’s disease in the era of ART. As the population of people with HIV ages due to the availability of ART, cognitive impairment may become more widespread.

Additional future studies will explore how Alzheimer’s-related conditions relate to cognitive impairment in people with HIV and examine the relationship between physical and mental declines, the impact on overall disease processes, and mental health.

Dr. Goodenow: Dr. Hodes, what research advances do you hope to see in the future in these areas?

Dr. Hodes: Older adults with HIV have greater risks for cognitive impairment, which can negatively impact the ability to engage in behaviors that benefit health. A greater understanding of the factors that promote healthy behaviors in the presence of cognitive impairment will help to address the needs of this aging population of individuals with HIV and the corresponding public health burden.

Dr. Goodenow: Dr. Koroshetz, can you talk about the unique challenges faced by people who are aging with HIV-related cognitive impairments?

Dr. Koroshetz: The success of ART in the mid-1990s substantially reduced the morbidity and mortality associated with HIV and AIDS and has resulted in an increase in the number of people over the age of 50 years with HIV. However, many believe that the central nervous system (CNS) acts as a protected reservoir for the virus, in which it hides from treatments intended to cure HIV. Given the population’s rapid growth, it is critical to understand the relationship HIV may have with the multiple complex pathways that cause age-related cognitive decline and dementia.
The presence of HIV in the CNS continues to persist in people with HIV, despite effective ART. These individuals often must manage other neurological disorders, including cognitive impairment, which can range from mild to severe. HIV-associated dementia is a severe form of cognitive impairment that is predominantly seen in individuals who are inadequately treated with ART. HIV can damage specific areas of the brain leading to a type of dementia associated with memory problems, social withdrawal, and trouble concentrating. People with HIV-associated dementia may develop movement problems as well.
Despite effective ART, many individuals develop mild neurocognitive impairment, which can impact learning, memory, and executive functions. These neurocognitive impairments can persist due to several factors, including viral persistence in long-lived cells in the brain, co-morbidities (e.g., mood disorders, metabolic syndrome, substance use, and coinfections), ART toxicity, and history of CNS injury. Those with HIV and navigating cognitive impairments must navigate major disability, loss of functional independence, adherence to ART, poor quality of life, and mortality—the burden of which will increase as they age.

Dr. Goodenow: Dr. Koroshetz, what studies are underway at NINDS to advance the understanding of the relationship between HIV, aging, and HIV-Associated Neurocognitive Decline (HAND)?

Dr. Koroshetz: NINDS supports basic, translational, and clinical research on understanding the effects of living with HIV, comorbidities, long-term exposure to ART, and aging on the CNS. Some examples include:

In addition to supporting investigator-initiated research to understand the relationship between HIV, aging, and neurocognitive disorders, NINDS has partnered with other Institutes to support collaborative projects:

Dr. Goodenow: Dr. Koroshetz, how does collaborative work with OAR and NIA contribute to NINDS’ efforts to study CNS impairment in older adults with HIV?

Dr. Koroshetz: NINDS is partnering with OAR, NIA, and NIMH to support research on the interplay between HIV and aging in the brain by jointly sponsoring a funding opportunity on Multidisciplinary Studies of HIV/AIDS and Aging (R01 Clinical Trial Optional).

Through this funding opportunity, NINDS is interested in fostering innovative basic, translational, and clinical research on the effects of chronic HIV infection, comorbidities, and aging on the CNS. NINDS is especially interested in research at the intersection of HIV-associated neurodegenerative processes, aging-associated CNS diseases, chronic ART effects, and host susceptibility factors.

Dr. Goodenow: Dr. Koroshetz, have there been breakthroughs in this area of research that impact HIV prevention or treatment approaches for older adults?

Dr. Koroshetz: Clinical trials thus far have had limited success, due to several factors. HAND is multifactorial, and the underlying causes and presentation of HAND in HIV-infected individuals is wide-ranging. In addition, the brain presents a unique challenge because the blood-brain barrier reduces the penetration of antiretroviral drugs into the CNS. This challenge, alongside neurotoxic ART exposure and other factors, has been a major barrier for HIV treatment in the brain.

Led by NIAID, with support from NIMH, the National Institute on Drug Abuse (NIDA), and NINDS, the AIDS Clinical Trial Groups (ACTG) Network conducts clinical and translational studies to develop safe and effective drugs, prevention strategies, and vaccines. Within the ACTG, the Neurology Collaborative Science Group facilitates the development and implementation of clinical trials relevant to the brain.

Dr. Koroshetz: Of particular importance is to understand the interplay between chronic HIV and the complex causes of age-related cognitive decline and dementia. There is a continued need for research into the pathogenesis of HAND, as well as into the development of therapies to reduce HIV-induced neuroinflammation and neurodegeneration in aging individuals. Further, cellular reservoirs of the virus in the brain are distinct compared to lymphoid organs, hence HIV treatment and cure strategies that specifically target the brain are necessary. Many NINDS scientists have taken on the challenge of examining pathologic conditions in the context of the neurovascular unit; that is, at the tissue level where glia, neurons, inflammatory cells, small blood vessels, and interstitial fluid pathways work in concert to support normal brain function. Such an approach might be valuable in understanding HIV’s effects on the aging brain. The neurotechnologies derived from the NIH BRAIN Initiative also allow precise mapping, monitoring and modulation of neural circuit activity that was not possible previously. Utilization of these technologies in animal models might lead to new insights into how chronic HIV infection alters brain circuits over time. Some of these neurotechnologies, especially the use of single-cell transcriptomic/epigenetic profiling are already useful in charting the cell-specific changes that occur in a stage-specific manner in multiple brain disorders.

Dr. Goodenow: Thank you, Dr. Hodes and Dr. Koroshetz. OAR will continue to prioritize collaborations and partnerships across NIH Institutes to reach HIV research goals. OAR is committed to advancing research to improve health outcomes for older adults who are at risk for or who have HIV.