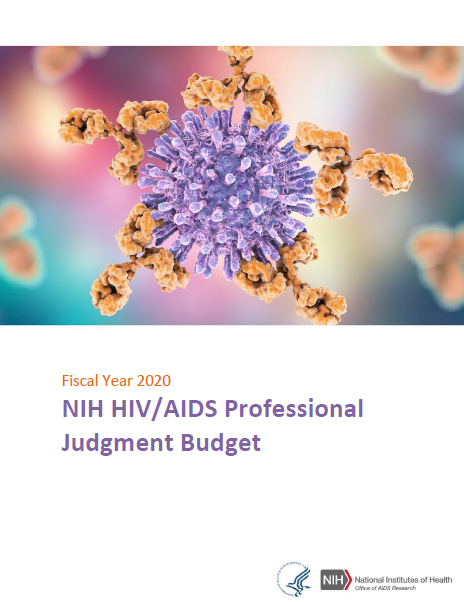 Each year the NIH Office of AIDS Research (OAR) releases a Professional Judgment Budget that estimates the funds needed to develop existing or pursue new scientific opportunities in HIV prevention, treatment, and cure research. Mandated by Congress, this document calls for OAR’s professional judgment based on the HIV research priorities and builds on the NIH Strategic Plan for HIV and HIV-Related Research. OAR recently released its Fiscal Year (FY) 2020 Professional Judgment Budget, which calls for $3,502 million, an increase of $457 million or 15 percent more than the FY 2019 estimate.

Although the NIH investment in research has led to groundbreaking HIV prevention and treatment options, significant health disparities remain. Additional innovation and discoveries are needed to reach all who are living with, at risk for, or affected by the virus.

Ending the HIV Epidemic. The Department of Health and Human Services (HHS) is proposing a once-in-a-generation opportunity to eliminate new HIV infections in our nation. Ending the HIV Epidemic: A Plan for America outlines strategies to reduce new infections by 75 percent in the next 5 years and by 90 percent in the next 10 years, averting more than 250,000 HIV infections in that span.1 The multiyear program will infuse 48 counties; Washington, D.C.; San Juan, Puerto Rico; and seven states that have a substantial rural HIV burden with the additional expertise, technology, and resources needed to end the HIV epidemic in the United States. HHS’s four strategies—diagnose, treat, protect, and respond—will be implemented across the entire United States within 10 years. Without this new intervention, new infections would continue to occur, and infection rates could increase, costing more lives and the U.S. government more than $200 billion in direct lifetime medical costs for HIV prevention and medication.

Aging with HIV. As a result of remarkable success in developing effective treatment and prevention strategies, people with HIV are living longer and healthier lives. In fact, nearly half of people with HIV in the United States are ages 50 and older.2,3 This trend is expanding across the developed world and eventually will reach middle- and low-income countries. More research to address the many health conditions and complications that people with HIV experience with aging is critical to caring effectively for this growing population.

HIV’s Impact on the Brain. Both HIV and its treatment affect the brain. About half of people with HIV are believed to have an HIV-associated neurocognitive disorder (HAND) affecting attention, language, motor skills, memory, or other cognitive functions. HAND is common even when people with HIV are on antiretroviral therapy (ART).4 Additional research to understand diseases of the nervous system in people with HIV is needed to help improve health outcomes. Furthermore, the effect of HIV on cognitive and mental health processes in the 5 million children and youth with HIV globally5 is not well understood and requires additional study.

Social and Geographic Disparities. Stigma and discrimination continue to affect access to HIV prevention modalities and services for many people at risk for and living with HIV. Some of the greatest disparities in the United States are seen in the U.S. South—defined as the District of Columbia and 16 southern states—which has some of the highest rates of HIV infection, illness, and death of any region in the country. In 2017, more than half of all new HIV diagnoses were in the South, where African Americans are disproportionally affected.6 Gay, bisexual, and other men who have sex with men account for 59 percent of all HIV diagnoses among African Americans in the South, and African American women account for 69 percent of all HIV diagnoses among women.7 Income inequality, poverty, and underfunded prevention and care services all contribute to worse health outcomes in these African American populations. Social factors—such as homophobia, transphobia, and racism—can lead to greater stigma, which may affect people’s willingness to seek HIV testing or care. Ongoing investments in research on behavioral and social sciences and on implementation are needed to find effective ways to address these disparities.

HIV and the Opioid Crisis. The rapid increase of opioid misuse and addiction is one of the most significant public health threats in the United States today. The use of controlled prescription drugs, synthetic opioids, and heroin has led to a rise in injection drug use rates, contributing to the spread of infectious diseases, including HIV. The challenges associated with opioid use have the potential to undermine the progress made to stop the spread of HIV and hepatitis C. Multidisciplinary research across the NIH is essential to address the opioid crisis and its impact on new HIV infections.

The OAR is confident that the FY 2020 Professional Judgment Budget request outlines the resources needed to accelerate the groundbreaking research discoveries that will help end the HIV pandemic and improve the health of people with HIV.