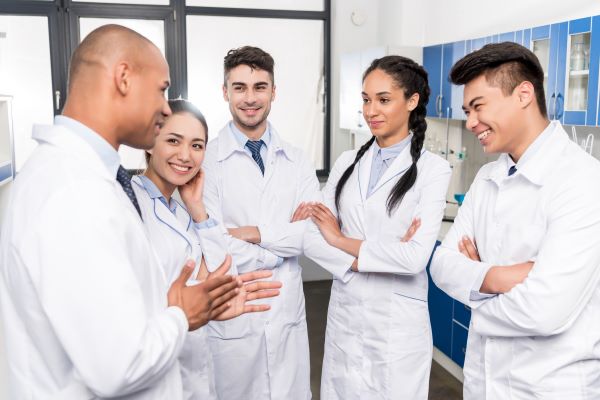 Enhancing Support for the Next Generation of HIV Researchers

Over the past 40 years, substantial progress has been made in preventing and treating HIV and AIDS; however, the pandemic is far from over.

Moreover, HIV prevalence and incidence are not distributed equally around the world and within the United States. Disparities in transmission risk, health outcomes, and death exist by race, ethnicity, sex, gender, age, and region and reflect ongoing structural inequalities in access to HIV research and its outputs.

To reach the goals of the Ending the HIV Epidemic in the U.S. (EHE) initiative, the science community must remedy disparities and further advance scientific discovery and its application in equitable and effective ways, that include focused efforts to enhance the pipeline, diversity, and sustainability of the HIV research workforce. OAR is committed to these efforts, as stated in Goal 4 of the NIH Strategic Plan for HIV and HIV-Related Research: to “build human resource and infrastructure capacity to enhance sustainability of HIV research discovery and the implementation of findings by a diverse and multidisciplinary workforce.” As a key element of this commitment, OAR is developing and implementing a multipronged initiative to increase the cadre of early career, next-generation HIV investigators—including NIH-defined Early Stage Investigators (ESIs) and Early Established Investigators—across disciplines and institutions.

As a first step, OAR conducted a portfolio analysis for fiscal years (FYs) 2015–2020 which found that, although the number of ESIs receiving their first grants at the NIH overall has increased since the inception of the NIH Next Generation Researchers Initiative policy in 2017, the number of HIV-focused ESIs receiving grants remained flat or decreased over this time frame. These data prompted OAR to take immediate action to identify the variables and determinants that contribute to a decline even in the presence of policies aimed to support early career investigators.

In early 2021, OAR convened a series of four virtual listening sessions with HIV research early career investigators to hear directly from them about the challenges and opportunities they face. Three sessions involved investigators who had received R01-equivalent funding in FYs 2018, 2019, or 2020, respectively; and one involved investigators who had not successfully competed for R01-equivalent NIH funding despite submitting multiple applications in FYs 2017, 2018, or 2019. Each session included between 10 and 21 early career investigators from diverse institutions and a small number of staff from OAR and NIH.

Key themes that arose during these sessions included—

The Expert Panel made a number of suggestions that are similar to the comments from the early career investigators, such as—

On June 5, the NIH joined colleagues around the world to commemorate the 40th anniversary of the landmark CDC Morbidity and Mortality Weekly Report (MMWR) that first recognized the syndrome of diseases later named AIDS. Now is the time to recommit to end the HIV epidemic and support the early career investigators who will be instrumental to achieving that goal.

I look forward to working with all stakeholders to ensure that the NIH enhances its development and support of a robust, diverse, and inclusive HIV research workforce in the coming years.

OAR is in the process of developing a new webpage to support a diverse next generation of HIV investigators and will launch the page soon. To learn more, and see that content, I encourage you to visit the OAR website for updates.